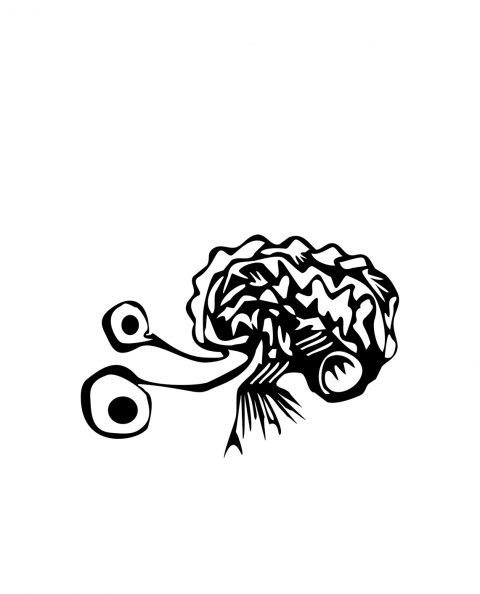 Dogma starts with the introduction of an Observer sitting in front of her Computer. She looks like surfing in web, maybe searching. We join her watching a movie on her screen. In the movie in a strange laboratorium an Alchemist is reading a Book. Again we join this time to the Alchemist looking into his book. In the book we see an Artist who is standing in front of a Tree and carefully watching it. The attention of the Artist gets caught by something behind the Tree. Our view follows his glimpse and we see a Bear by approaching a Bee hive. Thus we arrive already on the 4th layer of the narration. (Observer>Alchemist>Artist>Bear)

The „Story of the Bear and Bees“ depicts the act of destruction of an elaborated structure by the imprudent. The Bear digs and opens a hive and licks the dripping Honey. He is undisturbed by the stingy Bees. This kind of destruction happening outside of the human civilisation is likely to be called as „natural“ by humans and put outside of the borders of human culture, behind the Tree in a safe distance. Nevertheless this act of violence is taken as an example by the other figures in the following stories who mimic it. The example of the Bear is used for justification for the human figures for their own violent acts later.

Through the eyes, books and monitors 4 humans watching the scene and they witness the destruction of the hive by the bear: The Artist behind the Tree, the Alchemist reading this story in the Book, the Observer observing all this on her Computer and we -the Viewer- at the toppest layer watching the whole animation.

The story continues travelling between different layers of framed stories.

In the “Story of the Egg” we see the Alchemist putting an Egg under Microscope and examining it. This is the only time in the whole animation that we see a color other than black and white when we see a Finger placing the Egg under the lens. The touch of the Finger animates the Egg and starts a cycle of life. A Bird comes out of the egg which in turn lays another Egg hatching a Lizard. The curiosity about the Egg or more precisely where the first Egg comes from, the origin of life is a key question of science.

In the “Story of Science” the Alchemist represents the scientific curiosity and passion. The Alchemist is so inspired by the hatching and giving birth in nature that he starts to fondle his egg-shaped head and indeed the scientific curiosity of the Alchemist goes so far that he opens his own skull and takes his own Brain out to carry out research on it. Unfortunately being so uncalculated results with the dead of his body. His Brain nevertheless laying on the table immobile without the body defenseless against the curiosity of defiant Flies in the room. The Brain resembles a new Idea put out being open for critical and disturbing and disturbed curiosity of the audience.

In the “Story of Artist” we come back to the Artist in front of the Tree. He is also inspired by the Bear which took out the Honey out of the hive thereby destroying the Hive. The Artist packs his Axe out and starts to work on the Tree. Skilfully he sculpts a Bust out of the Tree. In this way he creates an idea or better to say an ideal. He worships this ideal only shortly after to destroy it and mourn after it. The ideal which was originally a product of his own curiosity became false for him and inevitably this brought him to destroy it.

In the “Story of Archeologist” we are back in the same scene where the Bear destroyed the Hive. Suddenly a Human approaches and tastes the Honey which was still dripping out of the Hive after the Bear left. Unfortunately the Bees come back and take their revenge from the poor Human. He gets stung many times and dies at the place. Time passes. His corpse dissolves and becomes Earth. After ages someone in a futuristic costume arrives. She is the Archeologist. She uses her Vacuum Cleaner to clean the dirt and reveal the Bones of a Human. She then only lifts the Skull and walks away leaving the other Bones. The Archeologist digging for discoveries shows another face of curiosity. She digs, finds and selectively chooses facts on Earth. A scientist can choose and pick and put facts together and expose them as a story he likes.

In the “Story of Museum” we get a brief introduction to the Museum by a camera pan. We remember here many things which we saw on previous stories: The Bear, the Bird, the Brain of the Alchemist, the Axe of the Artist and the restorated Bust are exhibited in Boxes, on Pedestals and in Cages. The Museum is guarded by a Guard. The Archeologist arrives at the Museum. She brings the Skull into Museum and puts it on a pedestal. The Guard salutes her.
After an unknown time period the Artist arrives at the door of the Museum. He has to buy a Ticket to enter. Curiously, confused and surprised he walks through the Museum. As if he is collecting parts of a puzzle he starts to interact with the exhibited items. He sets the animals free opening and breaking the Cages. He starts blurry to remember the previous stories. Finally he arrives and remembers his Axe and upon seeing the bust of the Observer which he previously destroyed all stories render complete to one story. This time he acts not destructive. He picks up the Bust and walks out of the Museum. Meanwhile the terrified Guard and Archeologist run away from the Bird and the Bear. Through building institutions of accumulation the human culture creates categories which act like cages. The isolation of things from their natural environment makes the analytical research possible. At the same time through this isolation the research objects context disappears and lots of knowledge gets lost.

Finally in the “Story of Me” the Artist arrives in front of a Computer which we remember from the very first episode. He places the Bust in front of the computer and leaves. Now the technology and art get confronted. The cycle closes and we realise that the Bust, the artwork also the ideal of the Artist was the very same person with the Observer with whom we watched all the previous stories on her Computer. She continues to get troubles with her connection but it is a creative progress setting disturbingly critical results (the flies) free. The curiosity of someone about his own nature is thus inseparable from the environment he lives.

Dogma tells these confusingly nested stories within the company of a very energetic and strong musical piece of J.S.Bach. It is the “Toccata and Fugue in D Minor” which builds a divine atmosphere around the story. In my opinion it is one of the best musical pieces where the universe and time can be felt as one piece running through the mind. It wraps all of the stories to one piece giving a compositional tact. For me the piece manifests the admiration for the whole universe which in turn is base for a never ending curiosity.