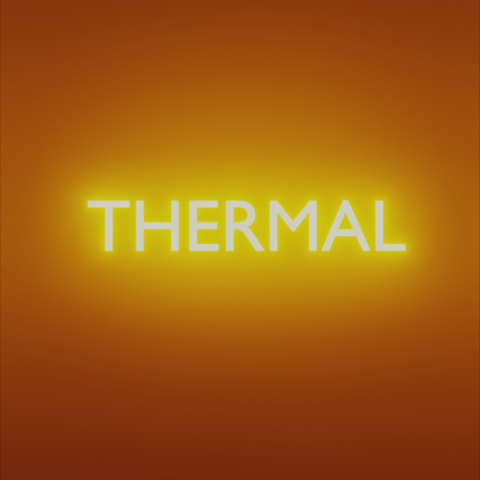 „Thermal“ is a poetic audio-visual work which explores the relation of the body and heat energy with subtle analytical images and sound from the Colombian biosphere. The work  includes a thermal camera capturing performance videos of Frederic Ehlers, which are digitally manipulated by Mert Akbal, underlined with an electroacoustic composition by Luca Forcucci. The creation date of the composition connects incidentally to the terrible forest fires around the Mediterranean basin in summer 2021.

„THERMAL“ is showcased in LASER Garden at Ars Electronica 2021 within the „Performing New Infrastructures“ program.

„Thermal“ is a vertical split screen video art based on Frederic Ehlers‘ performances recorded on a thermal imaging camera. His movements appear alternately sometimes insecure and estranged repetitive, and other times more open and daringly exploring the space and confronting himself. In both cases, he is observing his own image, though in pseudo-colors of the heat camera. Thermographic cameras have the advantage to see what seems to be invisible to the naked eye in the absence of visible light. By making the black-body-radiation -the emitted infrared light through heat from any object- visible, a thermal camera can be helpful to detect fever of diseased living beings, and help firefighters to see through smoke.

The video recordings were entangled by Mert Akbal’s digital manipulations and animations. The image of the performer is at times captured in a rotating cube, subjected to surveillance, and yet other times releases animated paintings of energy bursts, which emphasize his powerful movements which take over the scenery. This contrast between captivity and liberation, between being inside and outside is further stressed in triptych split-screen construction of the video with a main square on top accompanied by two smaller squares below. The three squares correspond to the body itself, with its internal and external boundaries. Three source videos are mixed in three consecutive scenes to show the contrasts between inside and outside, the invisible and untouchable, between past, present and future. At their very intersection the human body is recognized while it is observed as a trace of heat radiation. These intersections point to our deranged embodiment in a globally warming atmosphere and an estranged age in time.

Luca Forcucci’s electroacoustic composition is based on field recordings from the Colombian biosphere provided by the Cucusonic organisation. The sonic emerges directly from the manipulation of the sound recordings of various species of bats. A Spanish voice mentions the importance of bats and their role in the ecosystem. The interaction of the sonic composition with dance and visuals is purely chance based, in the sense that nothing was never planned between us beforehand. However, a synchronicity appeared nevertheless in the artistic collaboration, but also in particular as a thermal emergency, since fires started to burn part of the Mediterranean basin during the summer of 2021