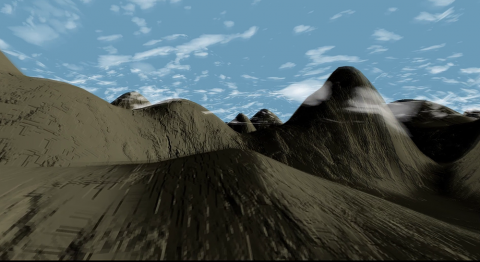 Dream Flight Simulator is an interactive art installation to reproduce the experience of dream flying in reality. For this purpose, I selected from my dream diary an example flying dream. I had this dream couple of months after I started working on the prototype of the dream flight simulator.
In 2012 on august 27th, I dreamt that I walked with three friends over the mountains. Finally we come to a temple. On the entrance of the temple we realize that 10 meters of the stairs leading to the temple are missing. We dare to jump over this gap and go up into the temple. There the monk who is sitting calmly in the temple teaches us how to dance in a trance. We dance in joy and through this dance we learn how to fly. I flap my arms as wings with a strong effort and at the end I succeed to fly. Before I leave the temple, jumping from the open side of the temple into the air, I notice two scientists, who are making measurements about the frequency of our brain waves, which might bring humanity the ability to fly. Afterwards I fly over mountains and I wake up.

In his 2000 paper “Flying (human) bodies in the fine arts, dreams and daydreams of flying” Rainer Schönhammer analyses the role of dreams in the imagination of flying and floating bodies in fine arts. He refers thereby to the 1882 lecture „The physiology of flying and floating in the fine arts“ of the austurian physiologist Sigmund Exner who is famous for his studies in perception psychology.

Exner claims that the depiction of floating subjects in fine arts recollect memories based on visual observations of birds, but also on vestibular sensory memories of humans based on their own motion during running, jumping and especially swimming. Exner refers also to his own dreams and describes his flying dream experience as “swimming in the air”.

Schönhammer supports Exner’s thesis and makes a comparison between the phenomenology of the waking imagination of flying, based on interviews on one side and to the flying dreams based on dream reports on the other side. He comes to the conclusion that kinesthetic illusions which are present in flying dreams are not based on pure imagination, but on memories of perception of weightlessness, like in swimming. Schönhammer also associates the lack of lower body limb movement both in flying dreams and in art pieces which show humans floating and flying. 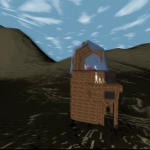 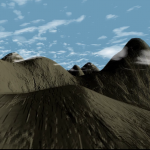 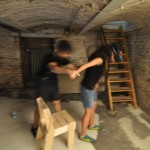 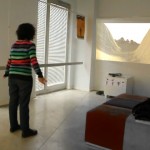 Dream Flight Simulation intends to contribute to this artistic tradition. The simulation is controlled by a kinect sensor camera which tracks body movements. The observer can flap his arms to fly. Similar to swimming he can push the air back and forth for acceleration or to brake in the air. Furthermore he can use his body both to rotate and tilt his position in the air.